This beautiful boy is Brychan. His owner was kind enough to share his story...

My 13 year old Cardigan corgi, Brychan, has been challenged by discomfort in his back and shoulders for most of his life because of poor front leg conformation. His activity has always been supervised, as too much running would usually cause lameness. He had been on low dose NSAIDs for many years and has had massage and chiropractic in the past. He had a couple of sessions of acupuncture, but the practitioner's schedule and location made it difficult to continue. He was recently diagnosed as being in early stage renal disease. Since his chiropractor moved away, he has really been slowing down and acting like an old doggie.

I was lucky enough to discover Dr. Susie out at my boarding stable. I felt that her utilization of Traditional Chinese Medicine and acupuncture might be the right modalities for Brychan. The bonus was she would come to our house to see him. He gets nervous when lifted onto an examining table, so she had no hesitation in getting down on her knees and treating him while he lay in his own bed!

Thus far he has had 3 acupuncture treatments over the course of about 2 months. There was a noticeable, positive response almost immediately. The second treatment really saw improvement. His lumbar pain was substantially reduced and he was moving more freely. I recently had Dr. Susie for a third visit just to address some subtle pain in his shoulder area. Dr. Susie also provided herbs to address the weakness in his kidneys, and had suggested some dietary changes to help restore his Qi, which we have employed.

He has gone from poking along, to forgetting his leash manners and charging ahead on his walks with an enthusiasm that I haven't seen in years. He has good reach in his front legs when he trots where, normally, his movement has been quite stilted. It has been wonderful to see his energy level and alertness improve. He no longer winces when I touch his back.

He is due for blood tests in another month or so, at which point we will be able to tell if the herbal and dietary support has helped slow his kidney disease. At the moment, though, I couldn't be more happy to see him comfortable and really having fun outdoors again. I am over the moon that I discovered Dr. Susie and, I hope, with her support, Brychan will have many good years ahead. 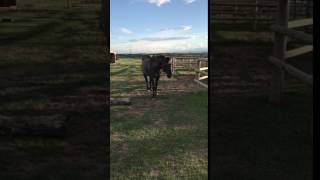 WHAT CAN ACUPUNCTURE DO FOR MY ANIMAL?

LET'S CLEAR UP SOME STUFF...

A DOG & A HORSE ARE GOOD OF COURSE

THE CHASE FOR AN ANSWER

THE IMPORTANCE OF BEAUTIFUL BLOOD

WHAT CAN ACUPUNCTURE DO FOR MY ANIMAL?

LET'S CLEAR UP SOME STUFF...